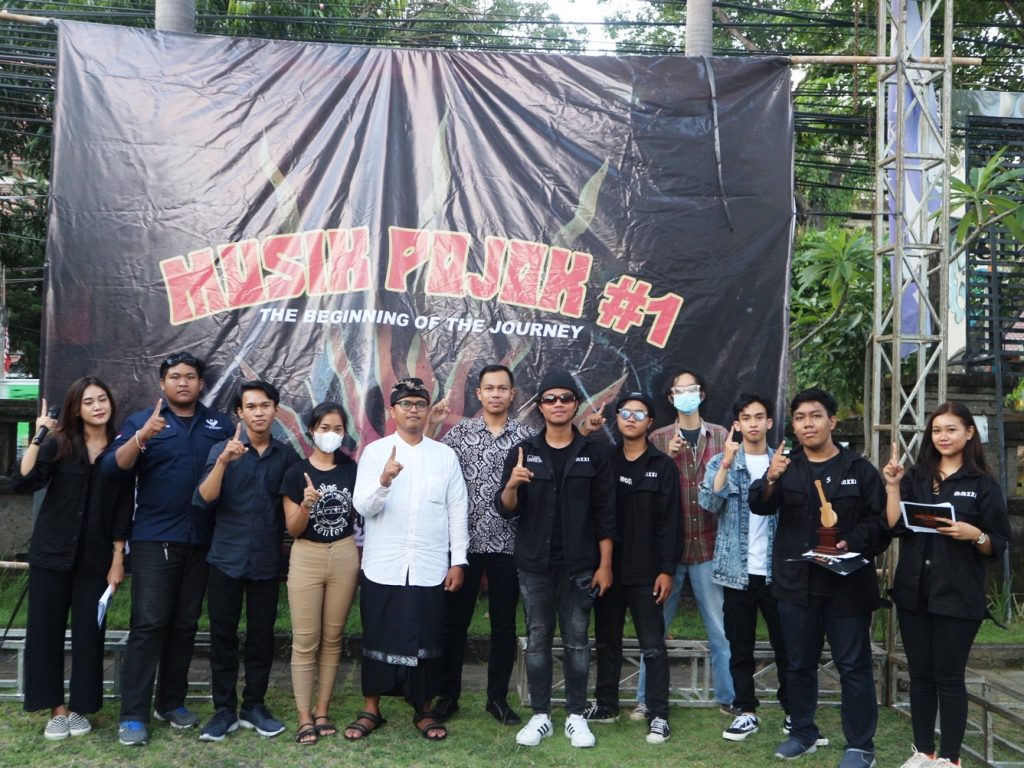 Denpasar – The #1 Musik Pojok event which is held every year by UKM STIKOM Bali Music Community or better known as SBMC. The #1 Musik Pojok is a band competition event which is participated by high school students and students in the ITB STIKOM Bali campus. This year, Musik Pojok #1 carries the theme “The Beginning of The Journey” where as the committee, SBMC UKM members, and competition participants can work together to reach the destination point. This event will be held on May 22, 2022 at Jeger House.

The competition starts virtually or online. Competition participants register via the google form that is already available, after registering participants can upload videos of their band’s performances to their respective Instagram pages. After closing the registration, the committee selected four internal winners and three external winners to appear in the offline auditions which took place at Jeger House.

The jury team in the offline competition were Robi Navivula, Tjokorda Bagus, and I Made Bhaskara Gautama, S.TI., M.Kom. At the beginning of the event, it started with the appearance of five internal participants from the ITB STIKOM Bali campus, namely the band Amarta, Black Cherry, Smitty Werben “Jaggerman” Jensen, and Ethernity. The event was lively accompanied by two MC representatives from Syntax UKM.

After the assessment ended, it was continued with a push-up competition while the committee averaged the results of the judges’ assessments to determine the 1st, 2nd, and 3rd place winners from internal and external participants. The internal champion was won by Amarta as first place, Black Cherry as second place and Ethernity as third place. The external champion was won by the Lentera Satra Community as the first rank, Tone of Wizard as the second rank, and Mine is Gold as the third rank.

The event continued with the awarding of certificates to the winners of internal and external competitions. After the announcement of the winners, it was filled with four performances from Guest Star, namely Full Us, Doora, No Wasted and Iron Head as the closing ceremony.

The presentation of the grand prize took place on May 14, 2022 at the ITB STIKOM Bali campus which was attended by SBMC UKM Trustees, Student Affairs Coordinator, BEM and BALMA.

The opening ceremony began with an acoustic solo performance by Angga Saputra and accompanied by two MC representatives from Syntax UKM.

After the appearance of the opening ceremony, it was followed by remarks from the General Chairperson of SBMC, SBMC UKM Trustees, and Student Affairs Coordinator. Followed by the delivery of the main prizes to the internal winners represented by I Made Bhaskara Gautama, S.TI., M.Kom.

The presentation of the main prizes to external winners was represented by IGN Wikranta Arsa, S.Kom., M.Cs as the Student Affairs Coordinator.

At the end of the event, it was filled with an acoustic solo performance from Davindra, a member of UKM SBMC as the closing of the event.