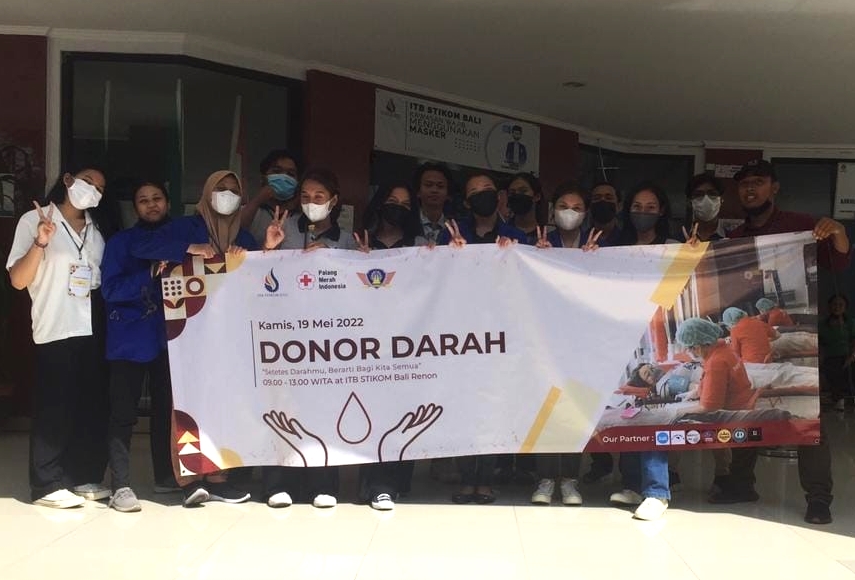 Denpasar – Thursday, May 19, 2022 Student Activity Unit of the Voluntary Corps (UKM KSR) Widya Bhakti PMI Unit ITB STIKOM Bali has held a Blood Donation activity which was held in the lobby of the ITB STIKOM Bali Renon campus. This activity was assisted by the Indonesian Red Cross (PMI) Denpasar City (Wangaya Hospital). This activity has the theme “A drop of your blood means for all of us”.

Head of the Blood Donation Committee, UKM KSR Widya Bhakti PMI Unit ITB STIKOM Bali Made Krisnawan explained, Blood Donation this time lasted two sessions. In the first session at 09.00-11.00 WITA and in the second session at 11.00-13.00 WITA. “It was recorded that there were 70 participants who registered but only 48 participants were allowed to donate blood so that 48 bags of blood were collected. This means that there are 22 people who have not been able to donate blood due to several factors such as high blood pressure, low blood pressure, low HB, menstruation, lack of weight, and others. Blood donation which is held annually is open to the public so that registrants do not only come from the students, lecturers, or staff of ITB STIKOM Bali, even participants from outside ITB STIKOM Bali can also register,” he explained.

This time, blood donation starts with registering, then asks them to fill out the form provided by UDD for further data input by UDD. Before taking blood, the registered participants must undergo a blood pressure and HB check, then after they are declared able to donate by the officer then they will get a queue number from the committee on duty. “After the blood donation, as usual, each donor gets some food, drinks, and blood-enhancing drugs as well as a certificate as a form of appreciation for them,” said Made Krisnawan.